Hubzilla - Getting Started: Cloning a channel

One thing that makes Hubzilla and Zap stand out in the world of decentralized social media is a feature called Nomadic Identity. It takes the concept of decentralization a step further. With other services, you create an account on a specific server, and your social identity (including all your contacts) is tied to that specific server. If that server is offline, or shuts down, you have to start over.

The Hubzilla / Zap approach is that you, personally, own your identity. Yes, initially you create an account on a specific server, just like with any other service. After that, however, you can export your identity to a different server, and it will be active on both, meaning if one of them is offline, you can simply switch to the other, seamlessly.

As explained in a previous step, the first thing you need to do after you registered an account on any instance is to "create your first channel".
A reminder:

Hubzilla is based on "channels". You could also look at channels as "identities": You create a channel and choose a Name and nickname, and this is how other people on the network will see you. This not dissimilar from other social networks, except that on Hubzilla, you can create several different channels (although the admin can limit the number of channels a user can create.) So without having to sign up for several different accounts, you can have different identities, and you switch between them from the channel menu.

This channel, not your account, is your identity. This concept is important, because it is the basis for Nomadic Identity. When you sign up on a second instance, in the first step after registration, you can either create a new channel, like you did the first time, or clone an existing one.

After your initial registration is complete, instead of creating a new channel for your first one, click on import an existing channel.

There are two ways to do this. 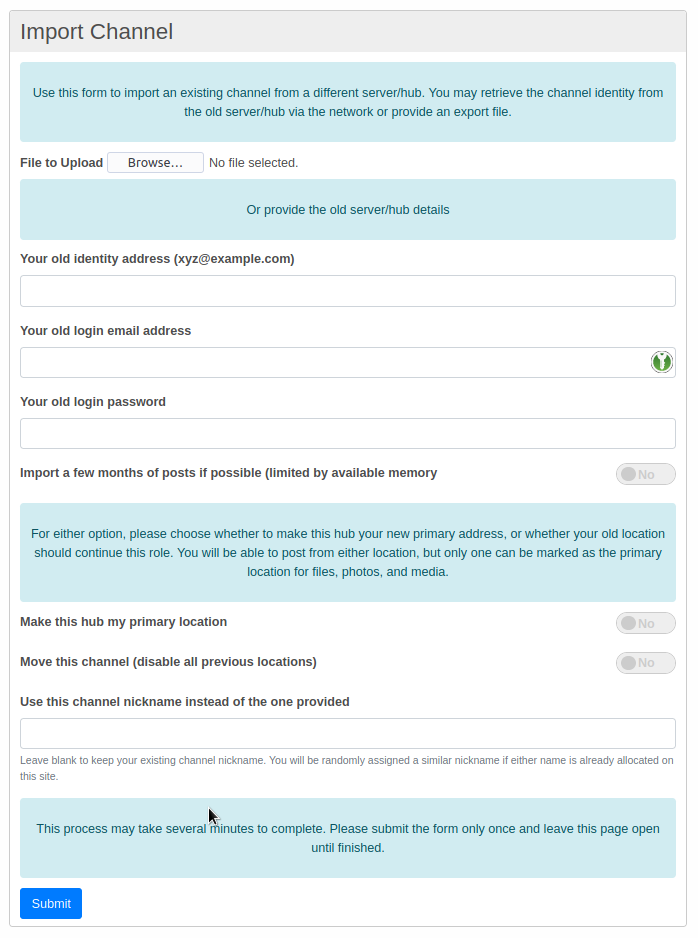 For the first option, you need to install the Channel Export app from /apps/available on your original channel. After you do, when you click on it, you can either export only your basic information (which includes your connections), or your posts and file storage as well. Either way, you will end up with a file called .json.

At the new location, after you click on "import existing channel", click "Browse" and locate the file you just downloaded. Then click "Submit" and you're done.

I'm going out on a limb here and assume that the second option is self-explanatory. Yes, it's perfectly safe to enter your credentials here.

Whichever way you choose, you can decide if you want the old location or the new one to be your "primary location". The primary location is the one your connections will see, the one that will show in the directory, should you choose to publish your profile there, and the one that the "Take me home" link points to that you see when you're remotely logged into one of your connections' channel. You can also change this later.

You will now have an additional entry in the settings called "Manage locations":

If you have already been using Hubzilla for a few months by the time you decide to clone your channel and wrote a lot, and uploaded lots of pictures, they won't get all imported using the second method; only if do a complete export using the first method. But since these export files can be very large, you can use the second method to clone your channel and then import the content from the original location to the clone using an app called "Content Import". (Note: This is not a default app; it needs to be installed by the admin. You can find out if it is installed by going to /siteinfo.json.) On your new location, go to /apps/available, install the "Content Import" app and open it.
Put the base URL in the form of from your original location into the field that says "Original Server base URL" and adjust the import settings to your preferences, then hit "Submit".

Connections on other networks

If you have connections on networks other than Hubzilla and Zap, it is important that you understand that those networks don't support Nomadic Identity. If you have, for example, the diaspora* app installed, your diaspora* contacts will show as "not connected at this location" on your clone, and if your switch primary locations, you will have to reconnect to those contacts.

Embed an image from your albums

Sorry, you have got no notifications at the moment...